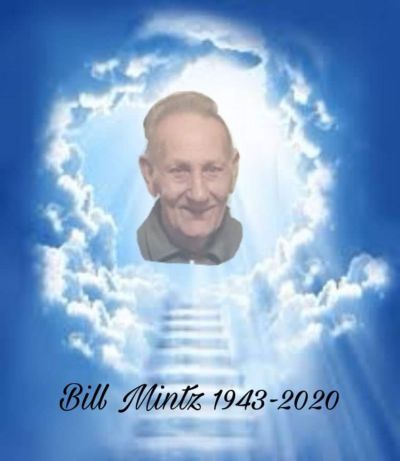 Waynesville- On Wednesday, September 2, 2020 the family of Billy Wayne Mintz, age 77, lovingly surrounded their daddy and granddaddy as he went home to be with his Heavenly Father and rest eternally in a glorious place of peace.

Billy was born April 12, 1943 to the late Rufus Mintz and the late Lucy Jane Rhinehart Mintz. Mr. Mintz had honorably served his country in the United States Marine Corps during the Vietnam War.  He had made his home in Haywood County all of his life and was a well-known brick and rock mason throughout Western North Carolina. An avid rock hound, Billy was featured in an edition of The Rock Hound Magazine that is published throughout North Carolina. He was a talented and self-taught musician and there was not one musical instrument that Billy could not play. His love for music included being the writer of many original songs and also being a member of the Radio Hill Gang that was indeed well known for their mountain music and performed all throughout the area. Billy was a man that was loved by everyone! He was a great storyteller and was blessed with a wonderful personality. When you were around Billy he usually had a joke to share and he definitely liked making everyone laugh.  He was a man who deeply loved and cared for his family and each of their hearts runneth over with happy and joyful memories that they have shared with him over the years.  In the words, of his children and close family members, “We were blessed with a wonderful daddy, granddaddy, great-granddaddy, and good friend and he was truly a man as good as gold”.  Our hearts are broken as we say goodbye but we each rejoice knowing that we will be with him again in his Heavenly home.

The funeral service to honor the life of Mr. Mintz will be held at 2:00 pm Saturday, September 5, 2020 in the chapel of Crawford / Ray Funeral Home and Cremation service. Pastor Dennis Queen will be officiating. The family will be receiving friends at the funeral home one hour prior to the funeral service. Burial with military honors will be held at Bethel Cemetery. Serving as pallbearers will be Billy Stamey, Michael Guffey, Blake Woody, Nicholas Dunbar, Gavin Dunbar, Tristen Colby, and Liam Stamey.

Crawford / Ray Funeral Home and Cremation Service is honored to be caring for the Mintz family.

I got to know Bill through earlene as we were coworkers and many events bill would be with her i even got to hear him play. Now he strolling over heaven and haveing a great time to the family a earlene May God keep you in his arms and be with you always
Angelia Franklin
posted Friday, September 4, 2020
Sending Prayers for all the family. We were heartbroken to hear about Billy's passing. Always enjoyed talking with him and was always happy to see him. He will be missed greatly. Edward and Sandra Moody
Edward and Sandra Moidy
posted Friday, September 4, 2020