A Man Loved by his Family and his Community 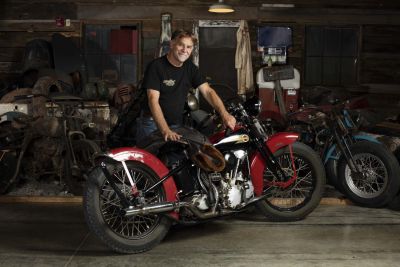 Dale Walksler, founder of the Dale’s Wheels Through Time Motorcycle Museum, former Harley Davidson Motorcycle Dealer, and member of the American Motorcycle Association and Sturgis Motorcycle Hall of Fame, who devoted his life to the advancement of antique motorcycles and their history, died in Maggie Valley, NC on February 3, 2021 at 68 years of age, with his wife by his side, after a courageous four-year battle with cancer.

Dale was born November 30th, 1952 in Oak Park, IL to Bernard and Mina Walksler and raised in Glen Ellen, IL. He attended Glen Bard West High School and Western Illinois University, where he studied Industrial Arts. He opened his first motorcycle shop, ‘Dale’s’ in 1973, and his second shop, ‘Custom Works’ in 1975.  In 1977, when the opportunity to buy Mt. Vernon Harley Davidson arose, he seized the chance. With a loan from his father Bernie, Dale became one of the youngest Harley Davidson Dealers in the history of the Motor Company at only 25 years of age.

His larger-than-life personality and marketing prowess allowed him to turn a small rural dealership into one of the most successful Harley Davidson franchises in the country. He renamed the dealership Dale’s Harley Davidson in 1982 and began his ascent to his status as a treasured motorcycle icon. He was voted “Dealer of the Year/Best Marketer” four years in a row by Dealer News Magazine and his exploits at his shop were legendary. He once took a bear cub in as a deposit on a motorcycle, and ‘Sammy’, as the bear cub was called, had the run of the shop until he outgrew his welcome and was retired to a local animal care facility. During this period Dale was blessed with the birth of sons Matt and Aaron. He was a successful racer and fierce competitor who participated in hill climbs, drag racing, and TT racing.  In 1992, he founded ‘Dale’s Wheels Through Time’, a museum housed inside his dealership where he displayed his collection of vintage American motorcycles. Customers came from far and wide to seek out Dale, his full-service dealership, and view his growing collection of antique machines. Dale’s theory was to use the museum to connect the next generation of motorcyclists with the rich history and traditions of Harley Davidson. It was the first of its kind.

In 1997 Dale rode a 1917 Henderson motorcycle coast-to-coast and beat Alan Bedell’s old transcontinental record, ending in New York City with an appearance on The Today Show with Al Roker.

He sold the dealership in 2000 and toured the United States scouting out a new location for his Dale’s Wheels Through Time Museum. He settled on Maggie Valley, NC, a bucolic town adjacent to the beautiful Blue Ridge Parkway and built a world-class facility to house his burgeoning collection of 350-plus American-made antique motorcycles. Known as ‘The Museum That Runs’, all the motorcycles in the museum start and operate, a testament to Dale’s incredible skills, craftsmanship and expertise as well as the dedication of his staff. Son Matt worked side-by-side with Dale at the museum allowing Dale’s incredible wealth of knowledge gained from a lifetime of experience to be passed down to his son.

Dale was a passionate collector of stories and motorcycle history, as well as antique machines.  In 2008, he started building a film library to preserve these stories and history, so that future generations of motorcycle enthusiasts could be educated about their hobby and sport as well as understand the vital role that motorcycles played in the evolution of transportation and society in the 20th Century. The collection of shows, which now numbers over 500, offer a unique perspective into man’s quest to overcome time and distance.

Hollywood called and Dale hosted the series ‘What’s In the Barn’ on the Velocity Channel (now Motor Trend TV) and followed that up with his hosting duties on History Channel’s ‘American Restoration.’ The TV exposure has helped make Maggie Valley, NC a must-visit destination for motorcycle enthusiasts worldwide, and his shows still appear on TV in over 239 countries around the globe annually.

His passion for Harley-Davidson was legendary, and a core part of his DNA. When asked what drew him to the brand, Dale stated, “It was the panache of the company and the idea that four young men, working out of a shed behind their dad’s home, could change the world.” Visitors to the museum often asked him what his favorite motorcycle was, and he always answered, “the last one I just rode.”

He is survived by his beloved wife Trisha; his father and step-mother, Bernard and MaryEllen Walksler; his brother, Doug (Carol); his sons, Matt (Hailey), and Aaron; step-children, Cory (Bonnie), and MacKenzie (Jordan); his grandchildren, Brooke, Isabella, Carter, Evelyn, Madison, Myla, Christopher, Ava, and Hadley; the entire Wheels Through Time family, and thousands of friends and fans worldwide.

A celebration of Dale’s life will be announced at a later date.

At Dale’s request, in lieu of flowers, please send any donations and condolences to Wheels Through Time, PO Box 790, Maggie Valley, NC 28751. All donations will be dedicated to ensuring the continuance of the legacy that Dale created far into the future and to giving museum visitors historical insight into the vital role that transportation has played in American history. The thrill of hearing the cycles run coupled with thoughts of riding into the wind will continue to evoke thoughts of Dale’s vibrant spirit --- and his dream.

Crawford / Ray Funeral Home and Cremation Service is honored to be caring for the Walksler family.