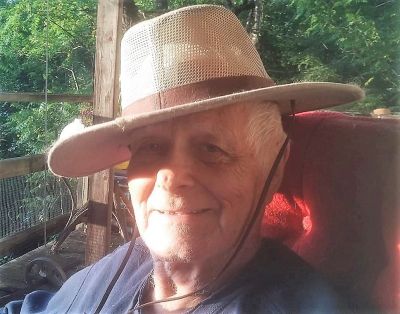 Clyde- Jack Church Fayssoux, Jr., age 85, passed away Monday, November 29, 2021, at his home surrounded by his cat, dog, and family in his home in the Western North Carolina mountains.

Jack was born in Tampa, Florida to the late Jack Church Fayssoux, Sr., and the late Margaret Pomeroy Fayssoux. As a family, they had moved to many places, including Mexico, before settling in Memphis, Tennessee to make their home.

Most of his adult life was spent in South Florida, New York state, and Western North Carolina. In all these diverse areas, he was touched by the suffering of people who were not respected in our world. He followed a Buddhist-inspired path of mindfulness while always respecting the religious and non-religious paths followed by others.

After retiring from teaching chemistry at a college in Florida, Jack continued teaching, sharing his interest in Tai Chi and yoga. He was inspired by teachers in areas such as Tai Chi, yoga, meditation, and massage. In turn, he inspired others to search for mindfulness, from south Florida to New York state.

In the last years of his life, he renewed his bond with the part of the country that formed him as a young man. He touched base with the land of country music and sweet tea as he enjoyed his North Carolina view of mountains as far away as the Great Smoky Mountains in Tennessee. He fondly spoke about people from his youth in the south including non-family members who were like family to him. He spoke of Henrietta, a lady, who took care of him when he was a child. Roy, a gentleman who worked for his first wife’s family, told our family that Jack was the only white man that treated him like a man.

While living in Panther Creek, he was fortunate to meet loving and caring people who helped him live a wonderful life even as his health was declining. Christy, Jill, Tonya, Sy, and others.

His family members' and friends’ lives have been enriched by knowing him. Although he would disagree with this idea, it is true.

He often encouraged people to follow a basic idea: “Love yourself.” In remembrance of Jack, please do love yourself.

"Jack is passing from this world to the next. He is taking a great leap. The light of this world has faded for him. He has entered solitude with his karmic forces. He has gone into a vast Silence. He is borne away by the Great Ocean of birth and death."

He was preceded in death by his daughter, Jackie.

He leaves his beloved cat, Sookie; his new dog, Ridgely; his sons, David and John; his sisters, Gayle and her children, Will and Matt, and Frances and her children, Meg and Max; as well as many other family members and close friends.

In honoring Jack’s wishes, there will be no formal services held at this time. In lieu of flowers, the family asks that you consider donations to Mountain Projects, a community action agency that offers support and resources to those in need. www.mountainprojects.org or to FUR of WNC (Feline Urgent Rescue of Western North Carolina) a group of volunteers who share the passion for helping homeless cats. www.furofwnc.org

Crawford / Ray Funeral Home and Cremation Service is honored to be caring for the Fayssoux family.

David , John and family you are in my thoughts and prayers ! I am so happy your dad , Ridgely and cat got to spend some wonderful years in their beautiful home nestled in the beautiful mountains of Western North Carolina ! It was good he could listen to some good old country music while enjoying the changes of the seasons the beautiful fall colors , the snow falls in the winter , and the renewing of a green lush new growth of spring ! I will always remember what wonderful children he had that so lovingly took care of him in his final years and Jack , I will always try to love myself ! Love to John and David !
Sandy Horton
posted Tuesday, December 7, 2021
My condolences to you and your family.
MikeyB
posted Tuesday, December 7, 2021
Toutes mes condoléances John, pour toi et les tiens...je vous embrasse My condolences to you, John, and your family
Odile LABRACHERIE
posted Tuesday, December 7, 2021
Words cannot describe what a kind, generous, gentle and insightful soul Jack is. He was my first Yoga teacher, he will always be my teacher. Akal
katherine walters
posted Tuesday, December 7, 2021
I am truly sorry for your loss. I will forever be grateful that I was allowed the honor of getting to know Jack. He was intelligent, kind and thoughtful. In the short time I knew him, he was always thinking of others and how he could be of assistance to them. I will miss his stories and his kindness. This world would be a happier and brighter place to be if we were all a little more like Mr. Jack.
Kyle Moore/ Haywood Public Transit
posted Tuesday, December 7, 2021
I knew Jack when he lived in New York. He was my yoga instructor. I think I will never meet a man as authentic as Jack! He helped me through a difficult time (loss of a close friend) and just being in his presence brought me calm. He was such a loving soul and I am sure many who met him felt his love. I feel blessed to have had time, although too short, to spend time with him. I wish I could hug him one more time!
Teri Hayward
posted Tuesday, December 7, 2021