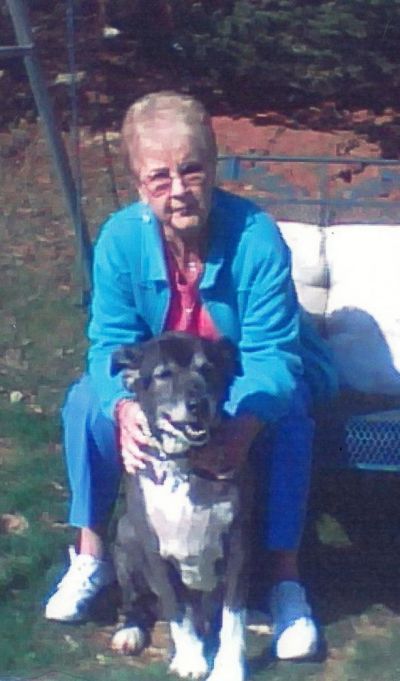 Jeanne was born February 17, 1925 in Salisbury, Maryland, and was the daughter of the late Thomas Clarence Davies and the late Theresia Hartman Davies.  Jeanne was blessed with the wonderful opportunity of being able to call various places home before making her final residence in Canton, North Carolina among the mountains that she loved. She had resided along the Eastern Shore of Maryland, the Hudson River Valley in New York State, the East Coast of Florida, and also in Atlanta, Georgia. Her younger years were spent being raised on the famous Glen Riddle Horse Farm in Berlin, Maryland, where several famous racehorses such as Man o’ War, War Admiral and Crusader were raised and trained.  This is where Jeanne’s strong love of horses began and also her concern for all animals which remained important to her during her entire life. One special childhood memory that Jeanne held in her heart was being discovered by her parents, resting safe and sound, in the horse stall with the famous Belmont Winner, Crusader.  This delightful story about her as a child was shared with many friends and family members and will never be forgotten. As Jeanne grew into a talented and lovely lady, it seemed as if she could conquer any undertaking that she might chose to do. She was a great supporter of the war effort of World War II and was employed with Dupont.  She was the owner and operator of restaurants located in New York and Florida and was also a telephone operator during the 1940's. Mrs. Harkness was an avid collector of antiques and her knowledge was truly amazing regarding the history and values of beautiful antique pieces.  She was a member of Oak Grove Baptist Church and also attended Rockwood Methodist Church in Canton. In the loving words of Jeanne’s family, “She was an awesome Mother.” Her sweet smile and her kind and giving heart were blessings to everyone who knew her.  We give thanks for the life of Jeanne Davies Harkness.

In addition to her parents, she was preceded in death by her husband, James Harkness who passed away in 1999; a granddaughter, Deborah; a very special aunt and uncle, Edna and Gordon and also a special aunt, Josie.

Memorials may be made in Jeanne’s memory to SARGE’S Animal Rescue Foundation, 256 Industrial Park, Waynesville, NC 28786.

Crawford / Ray Funeral Home and Cremation Service is honored to be caring for the Harkness family.

Jeanne loved her dogs....and was very faithful to have her hair done every week and was independent as long as she was able. I have her family in my thoughts and prayers.
Janie Cox
posted Thursday, June 6, 2019
I was married to her granddaughter Cathy for 4 years and dated her for couple years prior. Jeanne was a great woman, always so nice to me. RIP.
Brian Norton
posted Thursday, June 6, 2019
I am sorry for your loss, please accept my sincere condolences. I hope the family will find some comfort and strength in Jesus promise of the earthly resurrection(Acts 24:15)and the renewed Paradise earth, where death will be no more and no family will mourn the death of a loved one.-Revelation 21:3,4;John 5:28,29;Luke 23:43. may GOD(Psalms 83:18)grant you peace and comfort now, during this grievous time.-Matthew 5:4.
M Jones
posted Thursday, June 6, 2019