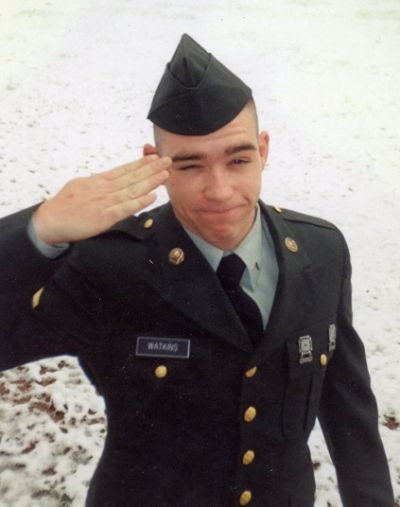 Jeremy was born February 12, 1975 in Haywood County and was the son of Dennis and Betty Griffin Watkins of Canton.

Loved by everyone who knew him, Jeremy was known to many as “Willie,” “Bubba,” “J.J.,” and even as “Jerm” and he would also typically have a nickname for his friends and family members as well. He was a member of the 1993 graduating class of Pisgah High School and had continued his education by earning his Computer-Aided Design (CAD) degree. Jeremy proudly served his country in the United States Army and was stationed in Germany with his faithful “Apaches.” He was a naturally talented handyman who could build and repair anything, Jeremy was employed as a skilled subcontractor with over 25 years of dedication to his trade. “Willie” was an avid hunter and fisherman, and enjoyed spending his time outdoors. He was “tough as nails, but gentle as a lamb,” and the type of person to loyally support his family and friends, and would also offer his help to anyone. We give thanks for the life of Jeremy.

In addition to his parents, he is survived by his loving wife of 9 years, Jaime Jane Vaughen Watkins; son, Connor James "Conrad the Caterpillar" Watkins; brother, Chris “Moo” Watkins and his wife Angie of Waynesville; niece, Samantha “Bobo” Watkins; nephew, Caleb Watkins; and many aunts, uncles, and cousins.

The funeral service honoring the life of Jeremy will be held at 2:00 pm Saturday, January 4, 2020 at Crestview Baptist Church in Canton. The family will receive friends from 12:00 to 2:00 pm prior. Dr. Dan Page and Sr. Pastor Ned Webb will be officiating. Interment will follow at Plott Cemetery.

Crawford / Ray Funeral Home and Cremation Service is honored to be caring for the Watkins family.