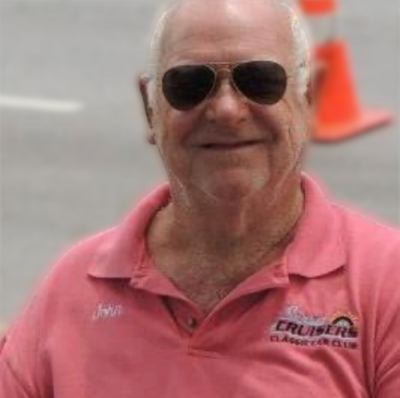 Canton-  On Monday, September 12, 2022 we lost a man that was well known throughout our community and a man that was a friend to everyone, Johnny “John” Mack Brown entered into his glorious heavenly home.

John was born September 21, 1943 in Waynesville, NC to the late James Ernest Brown and the late Christine Shelton Brown and had resided in Greer, SC throughout most of his childhood.  In 1960 his family made the decision to return to Waynesville and John was always proud to call Haywood County his home. He had been employed with Lea Industries in Waynesville where he retired with many years of dedicated service. John held a passion for restoring antique cars and was an active member of the Sunset Cruisers Car Club. He always held a true concern for his community and was very involved in the Canton Neighborhood Safety Watch Program. John and his beloved wife Ardith could often be found at Pickin in the Park during the summer seasons and in the winter they were always supporters of Pickin in the Armory.  Mr. Brown was a man of faith and attended Canton Wesleyan Church. John deeply loved his family and he was a wonderful husband, daddy, and paw.  His favorite place to “take it easy” was on his comfortable front porch where he would wave at friends and neighbors as they passed by each day. Let us each follow John’s example and reach out to others with a smile and a friendly wave to let someone know you care- John would be pleased.

In addition to his parents, he is preceded in death by his first wife, Lynda James Brown; a sister-in-law, Elaine Wright Brown; and a nephew, Luke Cullen.

A service of remembrance to celebrate Mr. Brown’s life will be held at 2:00 pm Saturday, September 24, 2022 at High Street Baptist Church in Canton with a time of visitation following the service in the church fellowship hall. Pastor Chris Willett and Pastor Amanda Fowler will be officiating.

Crawford / Ray Funeral Home and Cremation Service is honored to be caring for the Brown family.