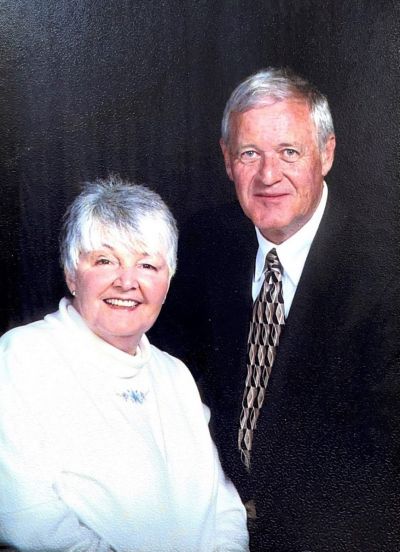 Leanna and James Ross (“Ross”) Kilpatrick, both 80, have begun their heavenly journey, bound together in eternity as they were on earth. Leanna’s spirit was lifted up on January 16, 2023 after a long battle with Multiple Sclerosis. Ross was taken into the fold on January 19, 2023 after a brief illness. They are survived by their children Gina Kilpatrick (Joni Madison), Andy Kilpatrick (Sarah), and Stacy Kilpatrick Waldroop (Mark); four grandchildren, April and Aaron Waldroop and Emily and Ella Kilpatrick; Leanna’s brother, Eric Zachary; Ross’s sister, Betty Jean Parham Conard; nieces and nephews David Parham, Tina Parham Daniels, Donnie Parham, and Wendy Deitz and their families; and numerous extended family. They were preceded in death by Leanna’s parents, Walter and Wilhemine Zachary; Ross’s parents, Ross and Ruby Kilpatrick; and their nephew, Chris Zachary.

High school sweethearts, Leanna and Ross were each other’s first loves. They married in 1961, ever true to their wedding vows. Leanna attended Women’s College in Greensboro, NC and worked as a secretary for many years at Blue Cross Blue Shield in Chapel Hill, NC while Ross completed his bachelor’s degree in Chemistry at UNC Chapel Hill and began his career. They lived in Chapel Hill until 1967 when they returned to their native Haywood County. At that time, Leanna became a full time stay at home mom and homemaker. Ross began work as a foreman at Champion Papers, working his way up to Vice President of Operations at the Canton mill. The couple moved to Florence, AL in 1984 while Ross worked at the Courtland, AL mill, again returning to Haywood County in 1989. Ross left Champion in 1992, embarking on an entrepreneurial journey. He owned and operated 3 restaurants, a time-keeping business and, for 21 years before retiring, a storage business.

Outside of work and child-rearing, Leanna and Ross were avid outdoors people. They both played golf and enjoyed the many parties at Springdale, Laurel Ridge, and Waynesville Country Clubs where they were members at various times. Summers were spent fishing, skiing, and making countless memories with family and friends at Lake Chatuge. Family hikes were a regular thing, as were weekend backpacking trips with their best friends the Burnettes, Curtises, and Kellys. The eight of them apparently swore secrecy about most details of those trips because the stories we remember always ended with “we will tell you about that when you’re old enough.” Old enough has yet to come.

As much as they were a couple, Leanna and Ross had their individual passions. Leanna relished getting her hands in the dirt and always surrounded her home with beautiful flowers and shrubs to attract the pollinators and birds she so loved. She kept a bountiful vegetable garden that yielded many a meal for the family. She delighted in homemaking and entertaining, taking pride in her tables at Thanksgiving and Christmas, or any gathering of family or friends in her home. As dedicated a mother as she was, she made time for all manner of activities from bridge club to belly dancing lessons, racquetball to aerobics classes, sunbathing (in a refrigerator box in cold months) to horseback riding. Leanna was outgoing, vivacious, and genuinely interested in people. She truly never met a stranger, with an ease of talking and listening to people that made them feel important and special, whoever they were. She also had a quiet, introspective side. She enjoyed Native American music, art, and traditions, loved solo walks in the woods for time in her “sitting tree,” was a voracious reader, and always reminded us to stop and smell the roses – a mantra imprinted on her by her beloved Uncle Ray.

Ross’s public interests stemmed from a call to community service. He believed in and lived by the Golden Rule and genuinely desired to help people become their best selves and to build community. He was a member of the Lion’s Club, Rotary Club, and Pigeon River Lodge No. 386. He served on several Boards, including Folkmoot, Haywood County Hospital, and Haywood Vocational Opportunities. During his time at Champion, he never lost focus on the people and the importance of the mill to the community.

Ross’s strong work and service ethic was surpassed only by his dedication to family. After a long day at work, he often came home to shoot hoops and throw softball in the back yard with the kids or take them up to Lake Logan to fish. He loved music, especially blues and R&B, and always had a video-recorded concert for the family to watch – volume cranked – at the holidays. Being a graduate of UNC, he was a Tar Heel through and through, rarely missing a televised football or basketball game, and taking the family to many a bowl game. The greatest example of his dedication was the care he provided Leanna in their later years. For the last 23 years, he was Leanna’s caregiver as MS took her ability to care for herself. Never has he wavered in his commitment to her, even in death.

Together, Leanna and Ross shared a long and happy life. They left a lasting impact on so many people, most especially their children. They instilled in us the importance of lasting relationships with life partners, family, friends, and extended family. They set a standard for treating others with dignity and respect that we strive to meet. We are so grateful for the village our parents built around us and will draw on it as we navigate this difficult time. Mom and Dad, we love you forever and we find comfort in knowing you are together again.

A celebration of life will be held at Central United Methodist Church in Canton, NC on Saturday, January 28, 2023 at 12:30pm. The family will receive friends at Central from 11-12 before the celebration. A private entombment service will be held on Sunday, January 29, 2023 at Crawford / Ray Memorial Gardens. The family would appreciate donations to the National Multiple Sclerosis Society (NMSS), Sarge’s Animal Rescue Foundation, or The Community Kitchen in Canton, NC.

Crawford / Ray Funeral Home and Cremation Service is honored to be caring for the Kilpatrick family.