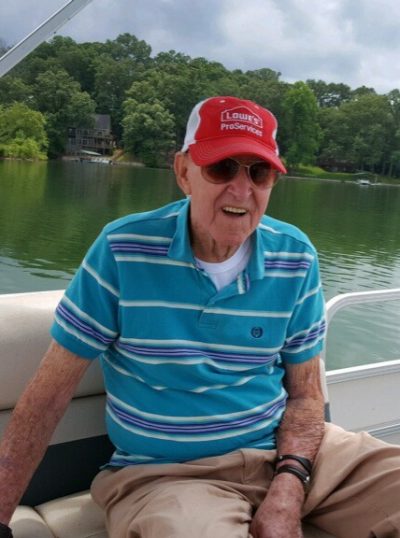 Canton- Manon “Pal” Stamey, a man who has been a blessing to many, passed away peacefully on Saturday, April 30, 2022. We give thanks for the 89 years that he was a part of our lives and we rejoice that he is in his heavenly home on this day.

Manon was born on December 22, 1932 to the late Fred Stamey and the late Alma Wilson Stamey. He was a lifelong resident of Haywood County and honorably served his country in the United States Army during the Korean War. Mr. Stamey retired from the North Carolina Department of Transportation with many years of dedicated service. A true outdoorsman, “Pal” loved the mountains where he was born and raised and he spent many hours fishing and camping. Lake Chatuge was a special place where Manon made many happy memories with his family and friends and he considered this to be his second home. He loved his family deeply and all his extended lake family were held close to his heart.  Manon loved all animals- horses, dogs, birds, and even foxes played an important part in his life. Yard sales and hunting for a good bargain often kept Manon busy and when he decided to settle in for a little relaxing time he could be found watching his favorite old western movies. Manon “Pal” Stamey will always be remembered as a kind and caring man that loved his family and honored his country. We will all miss him greatly!

In addition to his parents, he was preceded in death by his loving wife of 41 years, Jean Stamey who passed away in 2001;  sisters, Agnes Stamey, Beulah Stamey, Mary Hattie Keith, Viola Taylor, and Martha Gant;  brothers, Claude, Howard, Raymond, and Ted Stamey.

Dear Sherry, We’re so sorry for the loss of your Daddy. We know that no matter how old we are, it’s never easy to lose a parent. Our thoughts and prayers are with you during this difficult time. We hope you and JR know that we’re here for you, if there’s anything we can do to help.
Ellen and Dave Belliveau
posted Monday, May 2, 2022