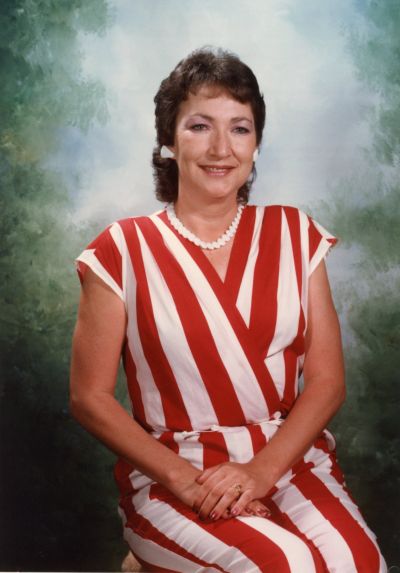 Jean was born in Waynesville, NC on March 30, 1947 to the late Charles “Charlie” Brooks and Geneva “Nig” Creasman Brooks.

In addition to her parents, she was preceded in death by two brothers, Charles “Red” / “Buddy” Brooks and infant brother Richard.

Jean contributed many years of service to the VFW Ladies Auxiliary.  She advanced through the offices becoming the NC State President of the VFW Ladies Auxiliary in 2003-2004.  She was honored in Oct. 2003, by Governor Easley, with the prestigious “The Order of the Long Leaf Pine” award for her years of dedicated service and support for the Veterans of Foreign Wars. Jean was a 17-year employee of Canton Food Lion and enjoyed spending time with her loyal customers and fellow employees.  She also spent many years working at Skeeter’s BBQ in Canton. Jean lived a full life growing up between Haywood County and New Jersey.  She also enjoyed her years living in the State of Washington where she learned to drive in the demolition derbies.  She was blessed with many friends in many states.  In her younger years, she enjoyed coaching girl’s youth softball. Jean enjoyed spending time with and cooking for her family and friends.  She enjoyed traveling and playing Bingo, and was always looking forward to her next adventure. Mrs. Bumgarner was an active member of Pinnacle Church of Canton.

Surviving are her daughter, Tamie (Bryan) Mull, of Canton; and three sons, Ray (Crystal) Bumgarner of Canton, John (Vivian) Bumgarner, and Tommy Bumgarner, both of Waynesville.  She was blessed with many beloved grandchildren and great-grandchildren. She is also survived by eight sisters, Lynn (Dale) Roberts of Waynesville, Carrie (Pete) Craymer of Hickory, Wanda Brooks of Waynesville, Gloria Bryson of Hickory, Joan Brooks Maier of Clyde, Tonya (Jimmy) Lanning of Clyde, Jenny (Jeremiah) Parton of Maggie Valley, and Christy (Jerry) Christopher of Maggie Valley; and two brothers, Danny Brooks of Waynesville, and Tom (Tooter) Jones of Hickory; and by a stepmother and friend, Sue Brooks; along with many nephews, nieces, aunts, and cousins.

A graveside celebration of life service will be held at 1:00 pm Thursday, January 7, 2021 at Greenhill Cemetery in Waynesville. Pastor Heath Davis of Pinnacle Church will be officiating. All COVID-19 regulations, masks, and social distancing will be observed.

In lieu of flowers memorials may be made to St. Jude Children's Research Hospital, 501 St. Jude Place, Memphis, TN 38105 or to a charity of your choice.

Crawford / Ray Funeral Home and Cremation Service is honored to be caring for the Bumgarner family.