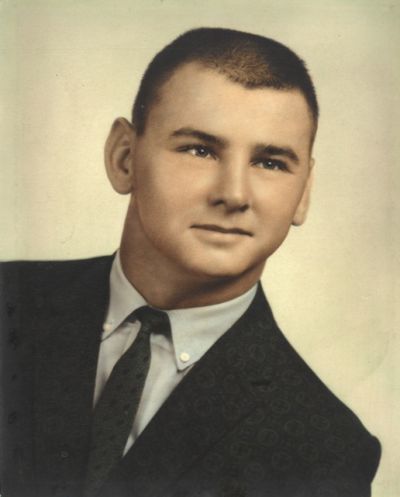 Tom was born February 8, 1939 into a wonderful family that surrounded him with love, joy and happiness all throughout his life. He was the son of the late William David Price and Roma Hipps Price. He was blessed to have the guidance of his family who instilled into him values that were forever remembered by Tom as he grew into an adult. He was loved by everyone and was known as a gifted athlete and a good and true friend. He was a member of the 1958 graduating class of Canton High School and was awarded a football scholarship to continue his education at Guilford College in Greensboro, NC. Tom later attended Blanton’s Business College in Asheville and received a Business Degree in Traffic Management which led to his career positions as a salesman and traffic manager for several major trucking lines. Mr. Price proudly chose to honor his country by enlisting in the United States Army/ National Guard and was later called into active service during the Berlin Crisis. He was always extremely proud of his hometown of Canton and together he and his twin brother, Don, owned and operated Twins Sports and Hobby Store in Canton for several years.  Another business venture followed in his life as he developed Tom Price Enterprises, which was a sales and brokerage firm for the procurement of trucks for companies and private individuals.  Tom was always surrounded with a multitude of friends and he was also actively involved in several community organizations: The Canton Lions Club, High Vista Board, President of the WNC Traffic Club, a member of The Canton Oldtimers Square Dance Team and also a member of The Rough Creek Cloggers.  His great love of sports continued all throughout his lifetime and he will also be remembered as a skilled and avid golfer. Even during his later years, with the faithful support of his golfing buddies, golf continued to be a positive and wonderful experience for Tom.  Mr. Price was a devoted member of French Broad Baptist Church in Hendersonville, where he was a member of the church choir and also served as the church treasurer.  His church family held a special place in Tom’s heart, as they loved and supported him in so many kind ways.  Throughout Tom’s courageous life journey, he was touched with immeasurable care and concern by physicians, nurses, and staff members of The Landings of Mills River, Mountain Home Care, Henderson County Adult Day Program and the Elizabeth House of Flat Rock who all made a heartfelt difference in Tom’s life.  As we reflect on the life of Tom Price we should forever remember his love of his Lord and his family, his zest for life and his great courage. His beloved daughter fondly recalls the words of her father’s visitors and many friends on several occasions saying, “I always loved his stories and I never left his presence without a smile.”   Tom Franklin Price - he shall be missed.

In addition to his parents, he was preceded in death by his step-mother, Sadie Price; his twin brother, Don Price and his brother, John Douglas Price.

Surviving are his loving and devoted wife of 57 years, Judith Williams Price of Mills River; his children, Mark Franklin Price of Mills River, and Paige Price Melton and her husband, Scott Melton of Fletcher; grandchildren, Hadley and Raelie Melton; a sister, Debbie Hall of LaGrange, GA, and a brother, David Price of Statesville, NC; several cousins, nieces, nephews, in-laws, and many friends.

Crawford / Ray Funeral Home and Cremation Service is honored to be caring for the Price family.

Judy, i was so sorry to read of your loss of Tom.May God comfort you and your family. Margaret R. Higgins
Margaret R. Higgins
posted Monday, October 28, 2019
I am sorry for you loss. I knew Tom when he worked in transportation. He use to call on me. He was a great guy with a great sense of humor. We use to share twin stories as we were both twins. Will keep all of you in my prayers.
Joy Latta
posted Monday, October 28, 2019
My deepest sympathy to you Judy and all of your family. Please know you are in my thoughts and prayers.
Juanita Dixon
posted Monday, October 28, 2019
So glad to be Tom and Judy's beloved daughter's mother-in-law and to have known this especially good man. Tom built his families home half way up a mountain and I ask him once how he ever found that beautiful place and he would tell me the interesting extended story of how it came about. He always had a good story and loved to share them. Will miss that, Tom.
Carolyn Fonte
posted Monday, October 28, 2019
Judy, Paige, Mark & Family. My heart goes out to each of you for the loss of your beloved husband and father. Tom was one of the original group of men in the High Vista community who made such a huge impact on my life. From playing golf with him on Saturday mornings in “the gang” to enjoying the wonderful Christmas parties at the price home Tom always proved to be a steady male influence on me as a young man. I can only hope to be a man of similar character and example to the individuals whose path that I may cross during my own life. I would like to extend my greatest regards and respect for Tom and his wonderful life as well as my deepest sympathies to the entire Price family during this difficult time. With love and peace I am very truly yours. Kevin Scott McCallister & Family
Kevin McCallister
posted Monday, October 28, 2019
What a wonderful obituary for a wonderful man! It’s a great tribute to Tom. I’m so glad I was honored to know him. Judy, Mark, Paige and Scott and your girls: you all are in my prayers. May you feel God’s comfort and the love and support of friends at his service and in the coming weeks and months.
Kris Hargis
posted Monday, October 28, 2019
Judy, I just learned today of Tom's passing. My thoughts and prayers are with you and your family in this difficult time. I pray that all of the good memories will help you in the days ahead. I pray for God's peace and comfort. He certainly touched the lives of many and it is such a privilege to have grown up with you both. Love you always, Nancy Lee (CHS-1958)
Nancy Pressley Lee
posted Monday, October 28, 2019
I enjoyed time with Mr. Tom when I visited my husband Bubba at The Landings. God bless you.
Marlene Willis
posted Monday, October 28, 2019
I lived on Newfound St in Canton and I would ride my bike up to see Roma. She was always so sweet to me. I knew of her twin boys from my mother , Pat Devlin. My deepest condolences to your family.
Lisa Devlin Patten
posted Monday, October 28, 2019