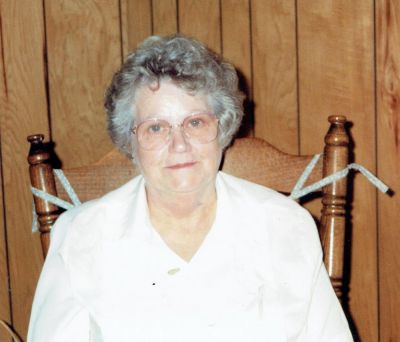 Canton - In the evening hours of Wednesday, March 4, 2015 we said goodbye to our loving mama and grandmaw, Wilcie Marie Early Reed who peacefully entered into the arms of the angels and was taken to her eternal heavenly home. Mrs. Reed was blessed to live a full and wonderful life of 86 years. She was born May 14, 1928 in Haywood County to the late William Early and the late Mary Hall Early. She was a devoted homemaker and she also retired from the Haywood County School System. During her dedicated years of employment with the school system she touched the lives of many children each day. Her kind heart and her sweet smile will never be forgotten by the many children and the teachers that she greeted and cared for every day. Mrs. Reed‘s faith was an important part of her life and she was a member of Canton First United Methodist Church. She was an avid reader and also a wonderful cook. Her delicious steak and gravy were always favorites of family and friends. Mrs. Reed will always be remembered as a loving wife, a proud and loving mama and to her grandchildren that were the love of her life, a grandmaw that loved each of them with all of her heart and soul. Precious cherished memories of Wilcie Early Reed will always remain in the hearts of her family and she will live on through each of them forever. She was preceded in death by her husband, James Franklin Reed who passed away in 2007; a great-grandson, Nathaniel James Reed; a sister, Hilda Pressley and a brother, Wade Early. Surviving are her loving son, Stephen Reed and his wife, Joyce Reed of Seymour, Tennessee; her grandchildren, Chrissy Kuykendall and her husband, Phillip Kuykendall , Angie Bryant and her husband, Shane Bryant, Jarom Reed and his wife, Adrienne Arnold, Lee Knight and Ed Knight and his wife, Sarah Knight ; great- grandchildren, “L. “ Lee Knight, Bayleigh Hardin, Taylor Arnold, Trent Arnold, Stephen Reed, Nolte Bryant, Lauren Reed, Jackson Kuykendall, Cheyenne Knight, Troy Knight, Dylan Knight and Savannah Knight; sisters, Betty Lou Clontz and her husband, Ayward Clontz of Canton and Audrey Mabry of Candler. The funeral service will be held at 3:00 pm Sunday, March 8, 2015 in the chapel of Crawford / Ray Funeral Home. Burial will follow in Bon-A-Venture Cemetery, Newfound Road. Grandchildren and great-grandchildren will serve as pallbearers. The family will be receiving friends at the funeral home one hour prior to the funeral service. Memorials may be made in Mrs. Reed’s memory to the Haywood County Rescue Squad, PO Box 1275, Canton, NC 28716 Crawford / Ray Funeral Home is honored to be caring for the Reed family